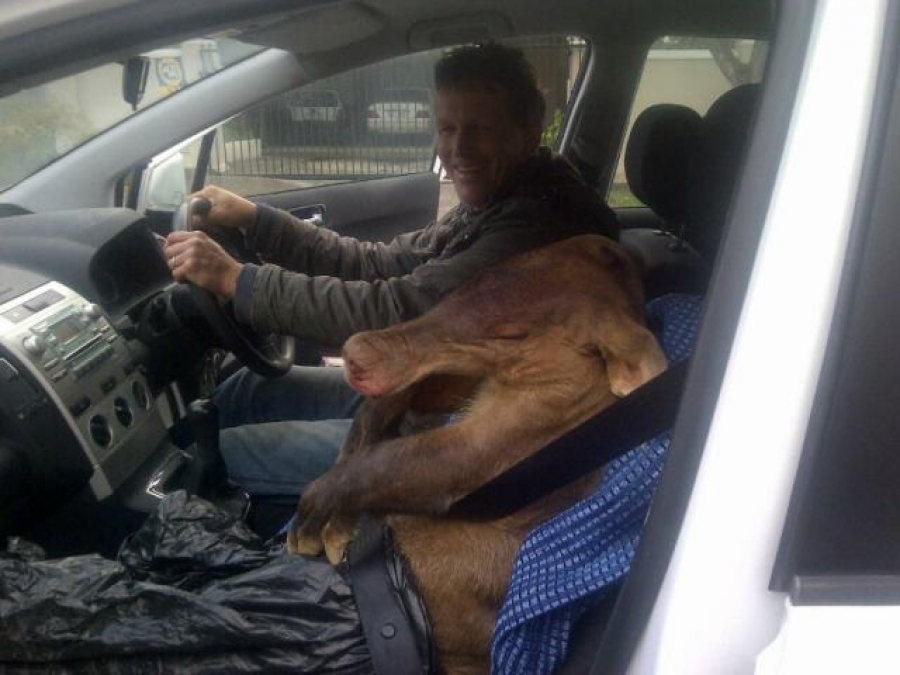 So much has happened since the day when we decided to construct our first 3D skeleton, the latter my son’s terminology for a complete articulated skeleton, as opposed to his initial attempts comprising of bones stuck to a piece of paper.  He was six years old when his pet rabbit died and he wondered with childlike innocence if he could not keep a part of the animal. That animal probably served as catalyst for taking the hobby to the level of articulated skeleton construction.  In a very short space of time his hobby engulfed our house, with skeletons spilling from his room into my study and from there to the rest of our homestead.  Eventually we were forced to acquire a hobby-house in our back garden – a good few meters away from the house.  We now had a “production site” complete with maceration and bleaching drums, as well as an array of cutting and scraping equipment.  The only problem was that our mini-factory did not solve the problem of space shortage for storage/exhibiting the completed specimens.  In fact, by de-bottlenecking the “production facility”, the shortage of available room was swiftly exasperated.  It was at this stage when a stroke of luck happened.  My niece told her schoolteacher of the hobby, who in turn relayed it to a journalist from a regional newspaper.  Subsequently the RKS story got coverage in a Sunday newspaper and eventually found its way to national TV.  During one of the interviews my son expressed his dream to have his own museum where his skeleton collection could be exhibited.  On hearing this, the owner of Butterfly World Tropical Garden near Stellenbosch, offered us the opportunity to exhibit there on a permanent basis.  A dream was realised.  Butterfly World was founded in 1996, with the initial focus on butterflies but has since morphed into a tropical garden serving as a home for destitute wild animals that cannot be re-introduced into the wild.  While most of RKS’s work may be viewed at Butterfly World, an additional display will soon be opened at the Two Oceans Aquarium in Cape Town.

I should mention that while I was initially simply supporting my son in his hobby, I gradually became engrossed by it until finally I had to admit to myself that I hijacked it.  I think skeletal structures fascinates me because it is a constant reminder of the connection between present and past.  When considering for example the eardrum (bulla) of whale or dolphin, the relation to land animals is glaringly evident and the role of natural selection in the evolutionary developmental cycle almost obvious.  Closer inspection of skeletons shows fascinating similarities and subtle skeletal differences between animals and even between different animal classes.  While fish moves their bodies from side to side in a similar way that snakes do, dolphins and whales propel their bodies forward with an up-and-down vertical motion, similar to that of a cheetah or jackal.  Likewise, amphibians like frogs’ scapula and skulls bares similarities to those of certain reptilian species.  Consider the vertebrae of any unknown animal and certain tell-tale signs will point to a specific animal class and sometimes even species.  The bones tell a story.  A story of millions of years of evolutionary change; of natural selection shaping things to the current state of life on earth. We only have to observe our own bodies to find evidence leading to ancestors of a distant past.  The useless small tailbone or coccyx all Homo sapiens possess serves zero purpose - a vestige of our ancestors of millennia ago still present in our modern make-up.  Fascinating indeed.

One of my personal observations on the skeleton journey, was how gaining knowledge leads to more questions.  Knowledge open doors, but inevitable it also raises more unanswered questions.  At the risk of sounding condescending, I cannot help wondering if this is not perhaps the reason why mainstream society shy’s away from gaining knowledge.  Knowledge humbles us, making us realise how much more there is to know.  The more we explore, the more questions arise.  It is perhaps easier to avoid going down this daunting path.  Easier not to question and easier not to extend our cranial matter to the point of uncomfortable questions.  It is indeed easier to “explain” the unknown away with some supernatural explanation dreamt up by ancient individuals that knew infinitely less than the average 6-year old child of today.  Carl Sagan once stated: “We live in a society exquisitely dependent on science and technology, in which hardly anyone knows anything about science and technology.” While this statement was made some decades ago, it is even truer for today.  We live in a society where knowledge is more accessible than ever before in the history of humankind.  Ignorance cannot serve as an excuse anymore.  I often hear people closing a debate or discussion with a “well, that’s your opinion”.  I regard this as a cop-out statement.  In modern society we only have a right to an informed opinion and since information is readily accessible, we have no excuse not to be informed or at the very least be humble enough to learn from those who have gone through the effort of doing the legwork.

Back to the skeletons and the purpose of this blog.  I hope this space can serve as a platform for knowledge exchange for ordinary individuals like myself yearning to learn from those with superior or specialist knowledge.  I will attempt to place topics ranging from skeleton cleaning techniques, articulation and fossils, to studies on the adaptation of skeletal structures to facilitate movement in different animals.  I will also pepper the blog with personal anecdotes related to a specific roadkill or skeleton; some of them sad, some comical, but hopefully all of them entertaining.  We hope you will enjoy this journey with us.